In the beautiful stretch of coastal scenery in northern Kyoto prefecture (京都府), lies a port town of lovely red brick buildings at Maizuru (舞鶴) Brick Park. Facing the Sea of Japan (日本海), Maizuru was originally a fishing village before turning into one of the most important naval bases in all of Japan. During the 1904 – 1905 Russo–Japanese War, many warships were deployed here.

When I first arrived at Maizuru Brick Park, I was greeted by the smiles of my tour guide, Fumiko Furuhashi, accompanied by Maizuru staff member, Megumi Matsuoka. Though visitors are welcome to walk through the grounds on their own, a guided tour will give you access to certain buildings otherwise closed to regular visitors. the tour is given in Japanese, so pick up an English guide at the park entrance at Brick Park Building No. 2.

After our greetings, we set off to venture into Japan’s naval history.

From Naval Base to Tourist Attraction 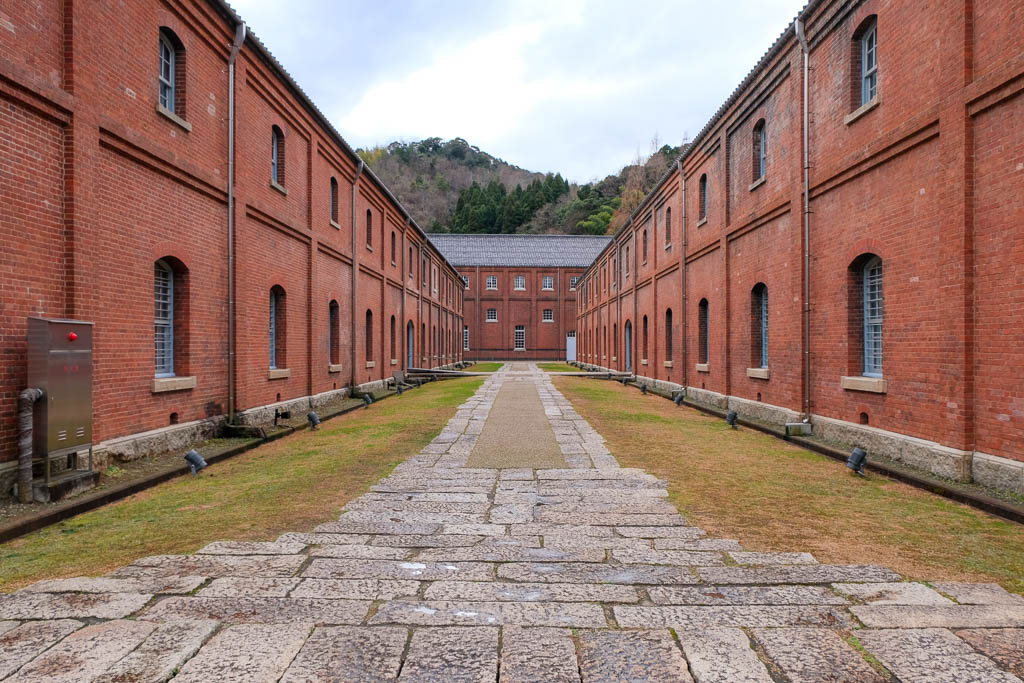 A view between Maizuru “Wisdom Warehouse” and Brick Park Building No. 4 is one of the most photographed spots at Maizuru Brick Park

Built during the span of the Meiji era (1868 – 1912) and Taisho era (1912 – 1926), the brick buildings were used primarily for storing naval munitions such as torpedos and other machinery. Because of the overlapping eras, some of the architectural details vary. For example, the gables of the Meiji era were more decorative, while the overall design of the Taisho era were much more streamlined and simple. 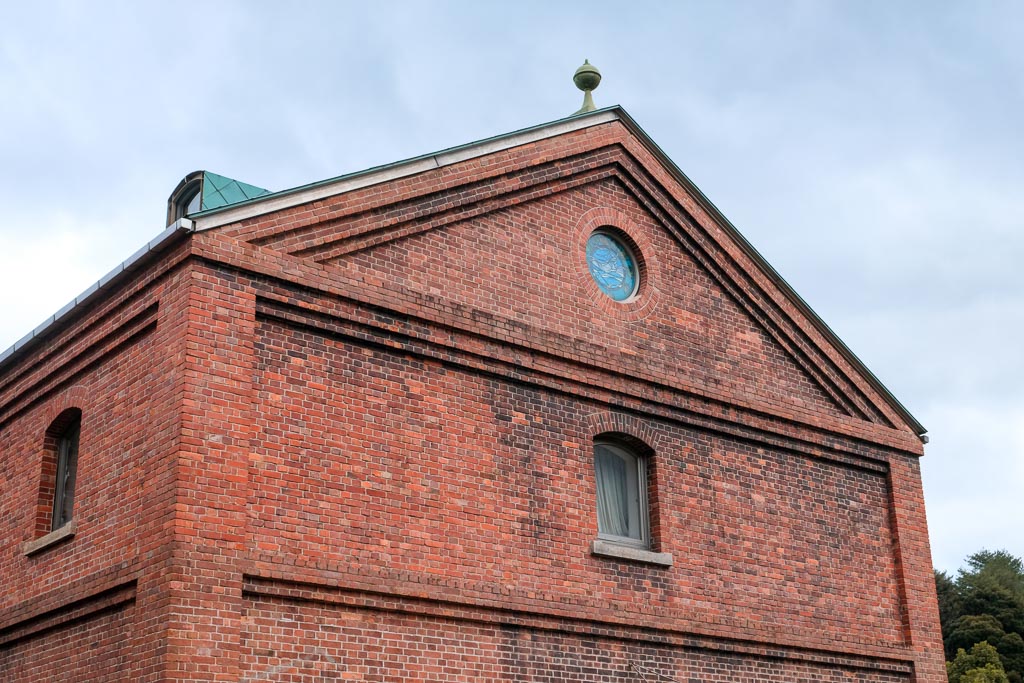 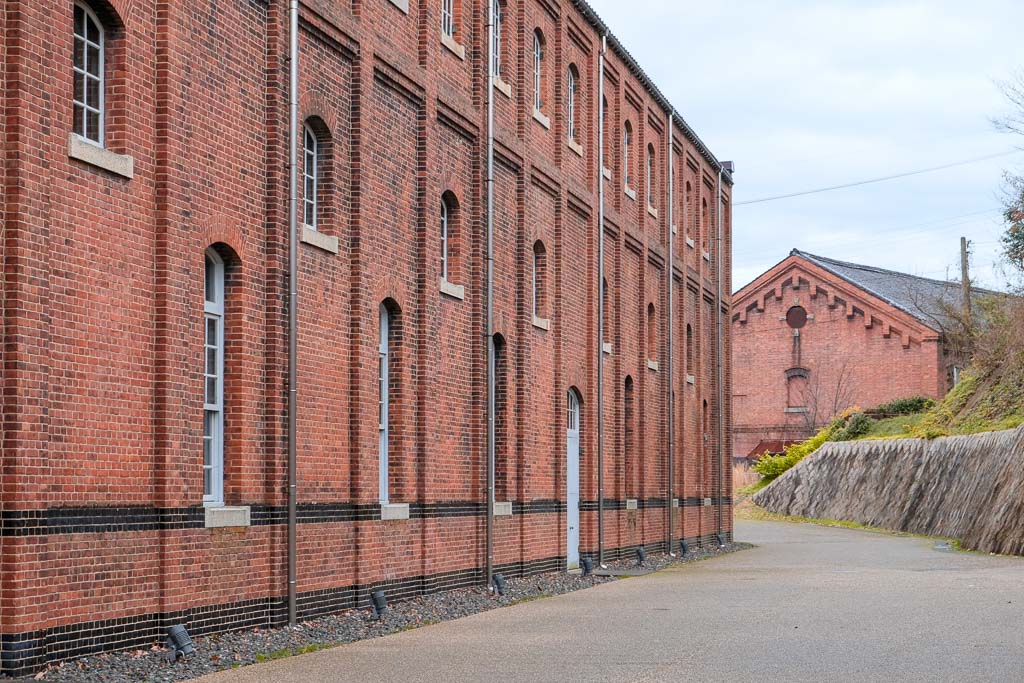 During the Second World War, the buildings’ signature red brick color was painted black to avoid detection from air raids. As a result, all the buildings were effectively saved, and some still have their original wooden doors and windows. 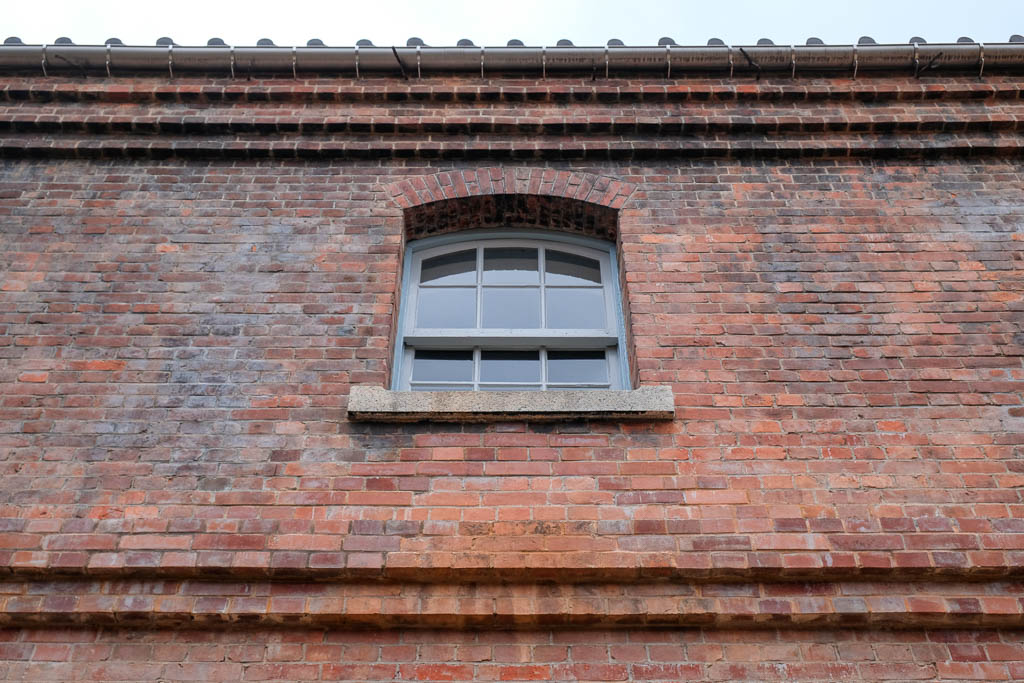 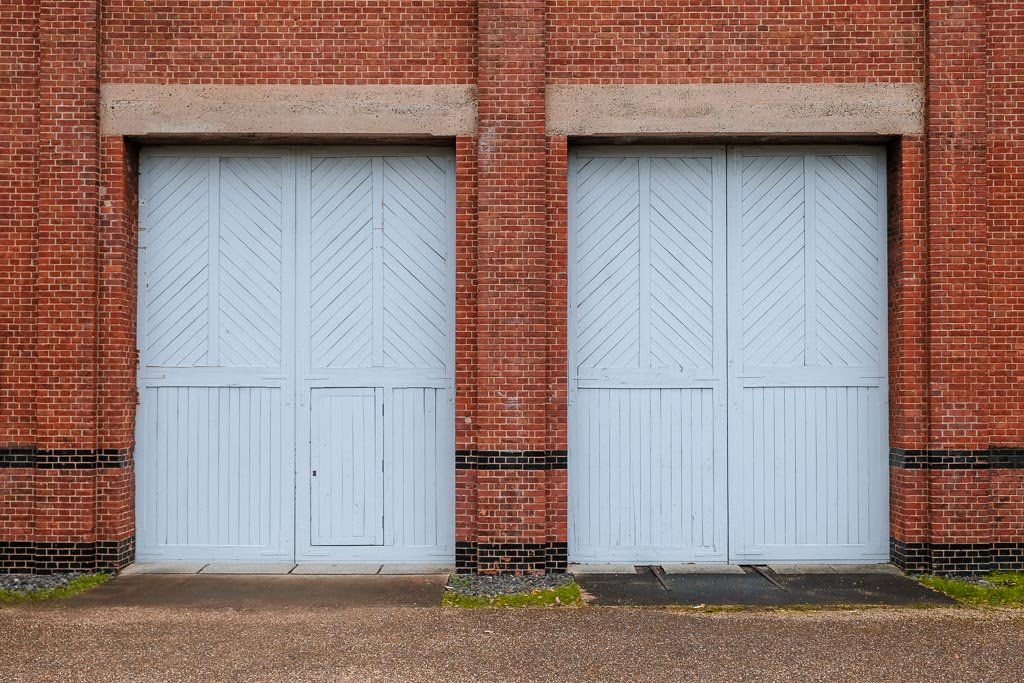 Out of 12 Maizuru buildings on the premises, 8 are owned and managed by the Maizuru local government and are considered national important cultural properties. Making full use of their spaces, the warehouses have been converted into a museum, gift shop, restaurant, and event spaces that can be rented out by the public. 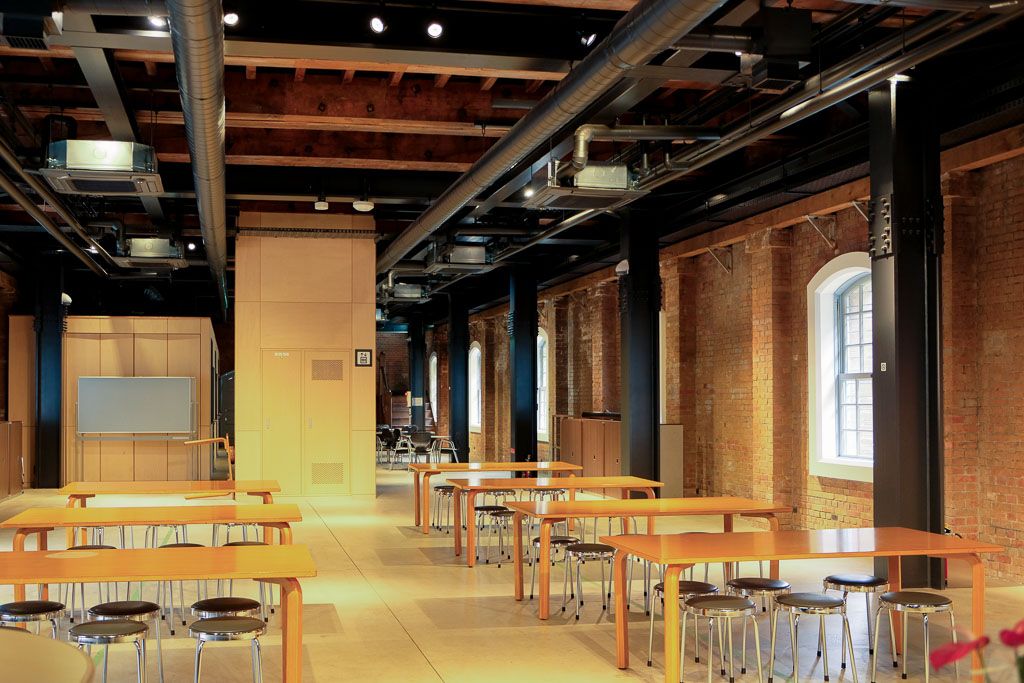 The multipurpose hall in the Red Brick No. 5 Building is the largest out of all warehouses. Built in 1918, it was more solidly constructed than some of the others, and for good reason: This spacious hall once stored the torpedoes used by the Navy during World War One. A railway runs through the course of the hall, and a large crane used to lift the heavy artillery hangs from the ceiling. Now, it serves as a multi-purpose hall for exhibitions, bazaars and music events held throughout the year. 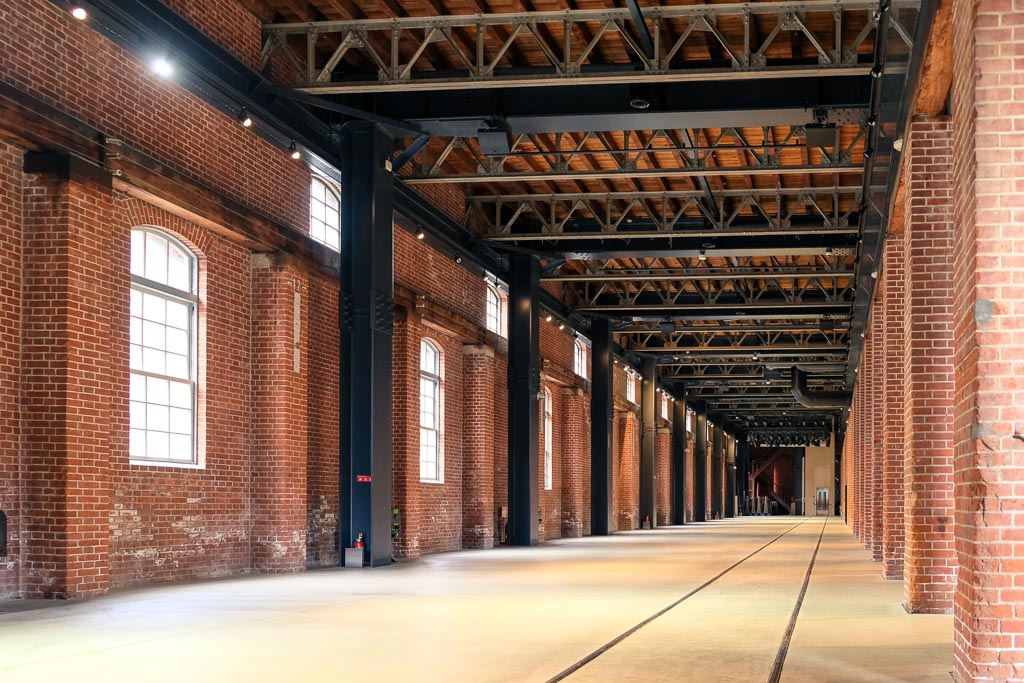 Multipurpose hall for concerts and exhibitions

We followed our guide to the eastern side of the park to the Road to Brick Park. Unlike their renovated siblings, these three buildings are the perfect setting for war-time movies, and have been featured in films and television programs in the past. Under lock and key, my guided tour granted me special access inside.

A further walk down are warehouses that are still occupied by the Japan Maritime Self-Defence Force which currently docks their ships in the nearby gulf. Unsurprisingly, those are not open to the public. 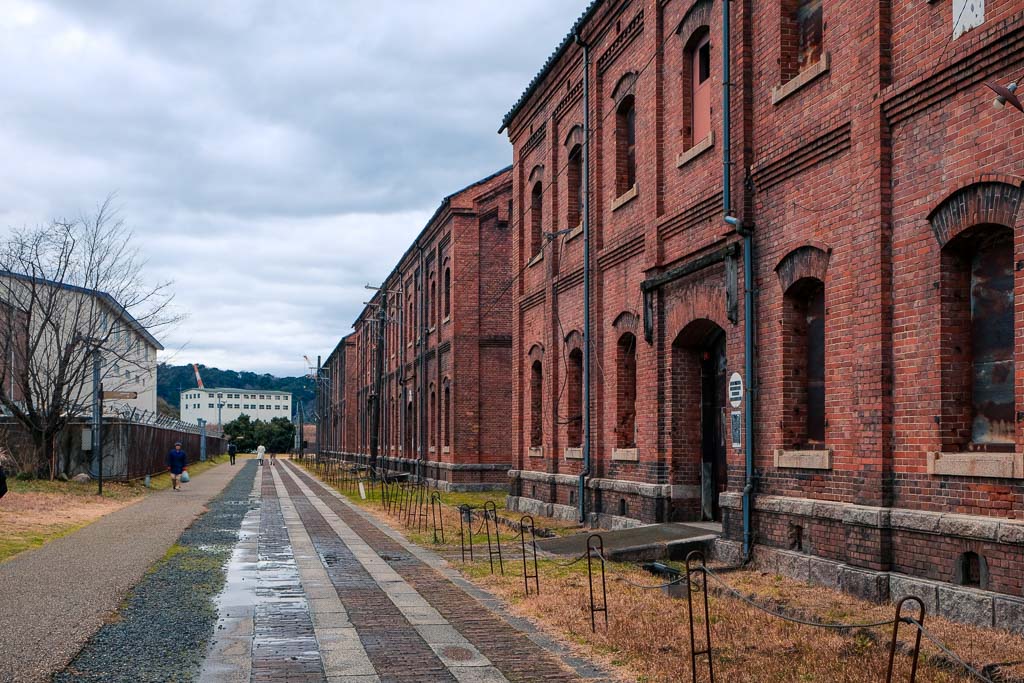 Looking down “Road to Brick Park” 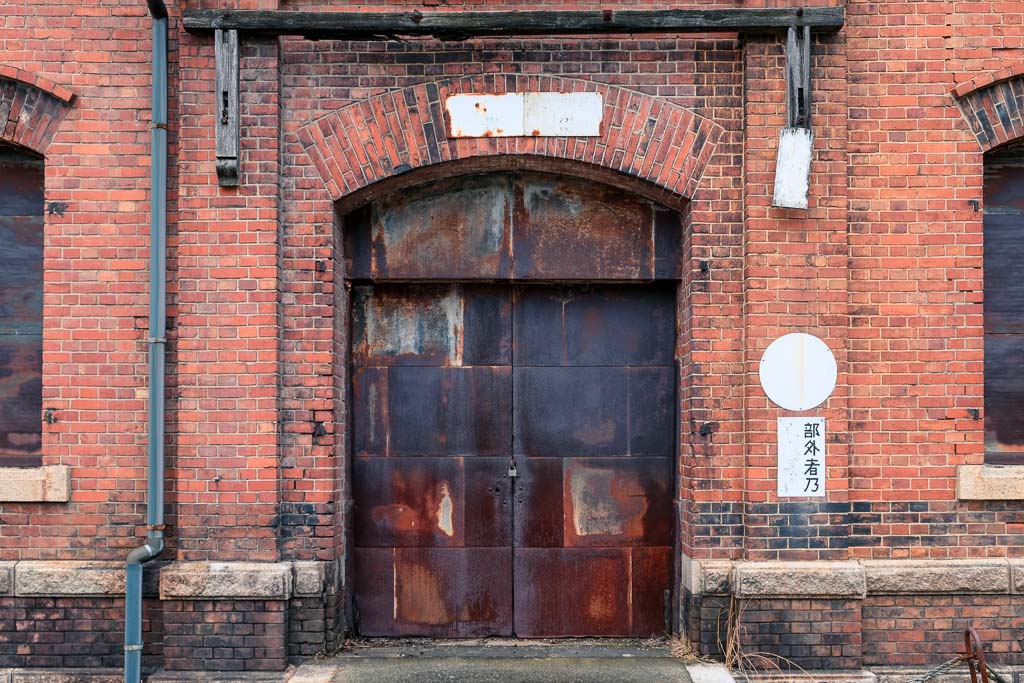 As electric light slowly fills the room, it takes a few moments for my eyes to adjust to the darkness. Once they do, I wandered freely through the first floor (the second floor is off-limits due to safety reasons). An old railway cut through the building floor, and I could make out the faded text of old newspapers that were pasted around the windows. A mining cart sat next to the railway, though upon closer inspection, it was, in fact, a prop from a movie once filmed there. 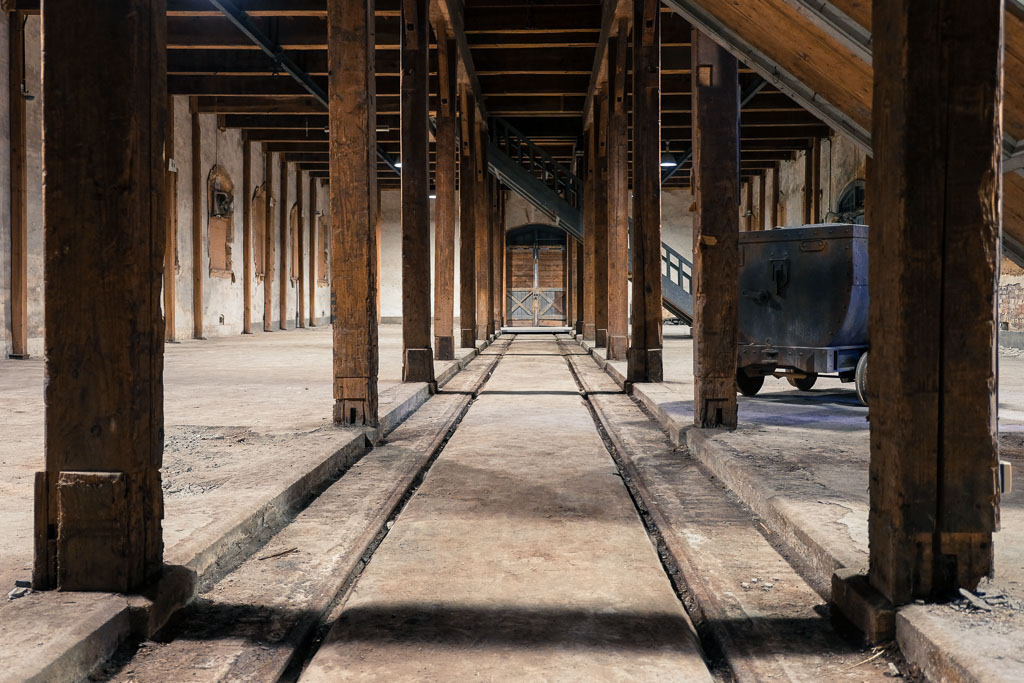 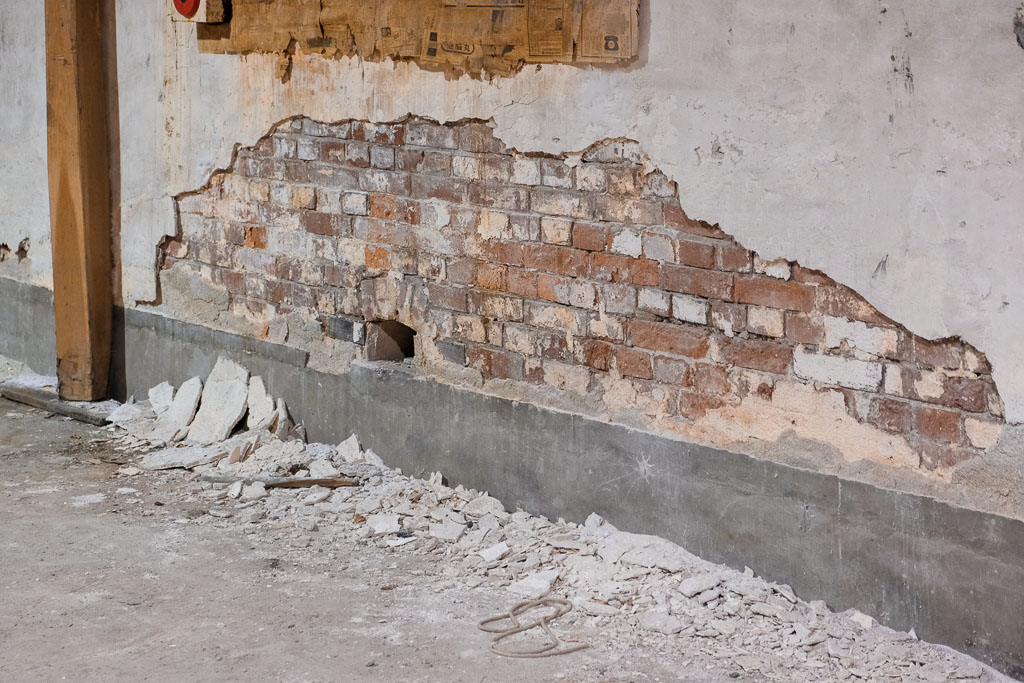 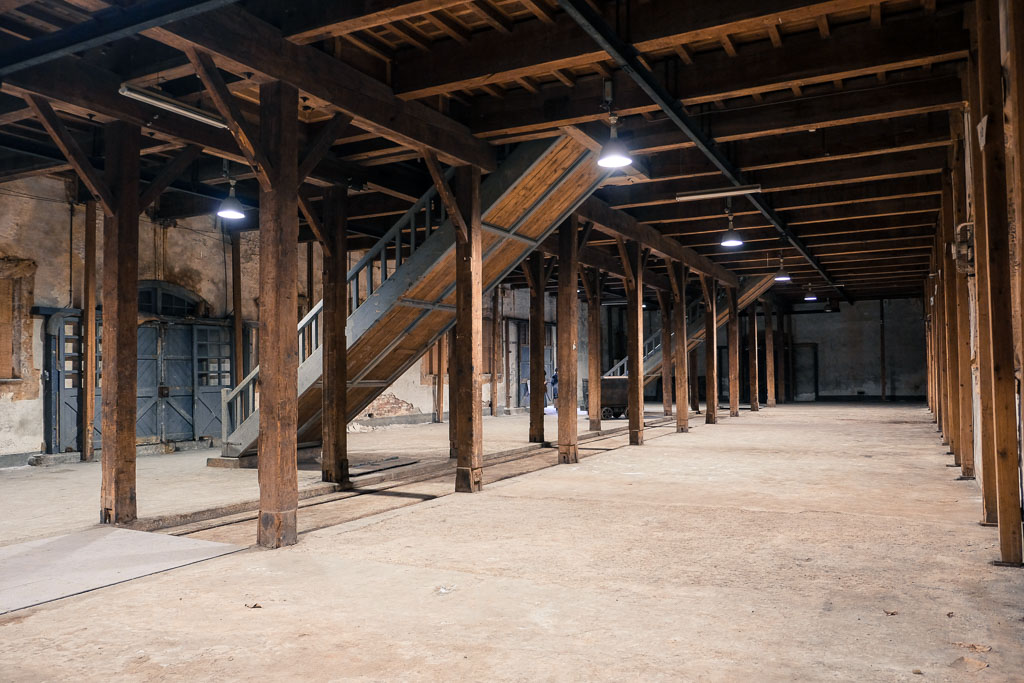 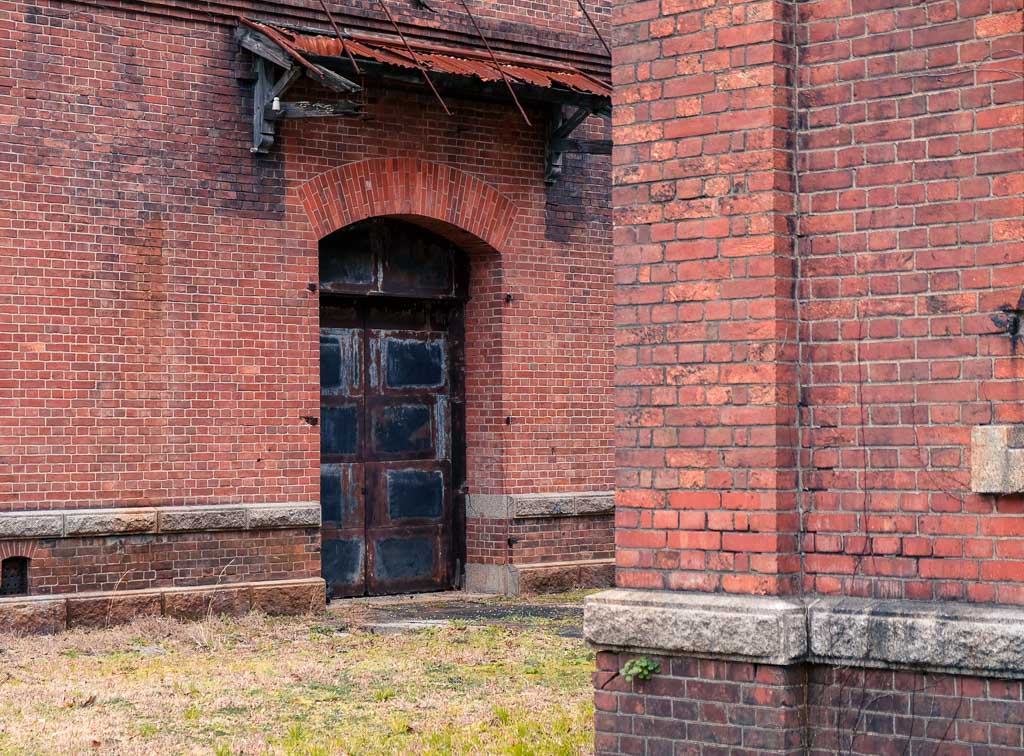 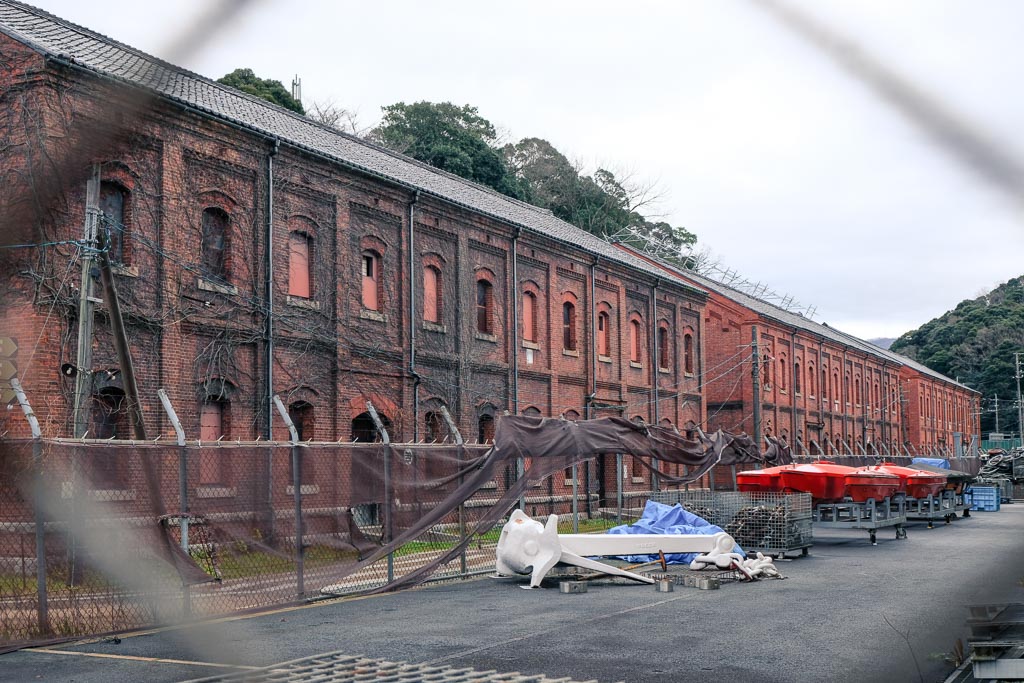 Warehouses along Road to Brick Park

After touring the main premises, we followed our guide out of the main park grounds to our last destination: the Former Kitasui Water Purification Plant. it’s roughly a 15-minute walk, and most of it is on level ground. the final stretch of the walk is uphill, and though it’s not long, our group did need some timely stops along the way. We had a nice vantage from the hill of the docked ships of the Japan Maritime Self-Defence Force below during our climb. 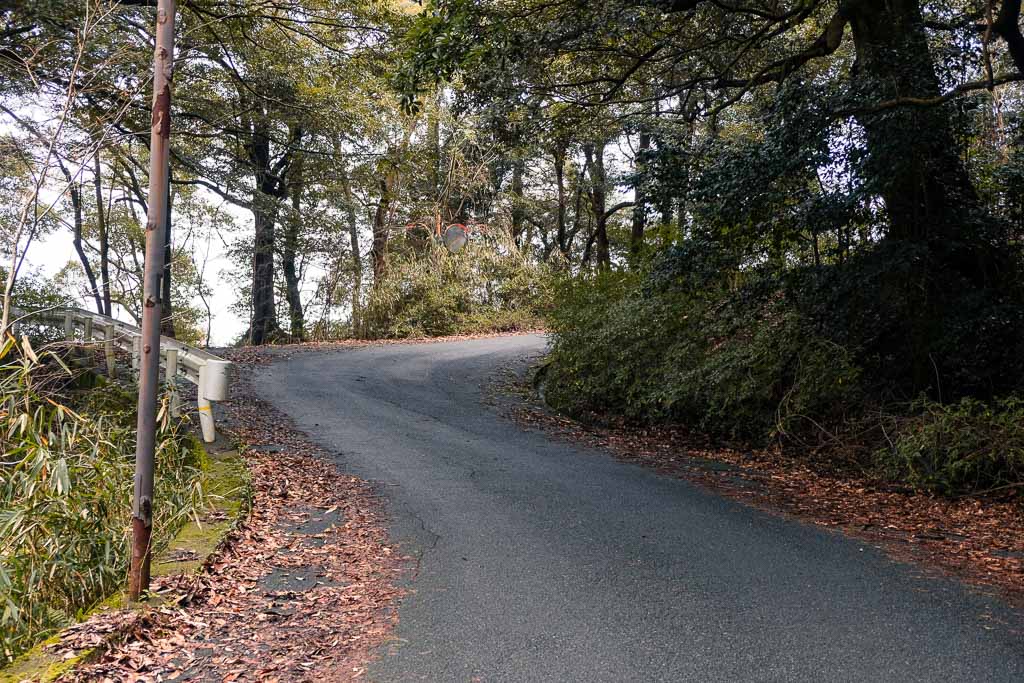 Road up to the Former Kitasui Water Purification Plant 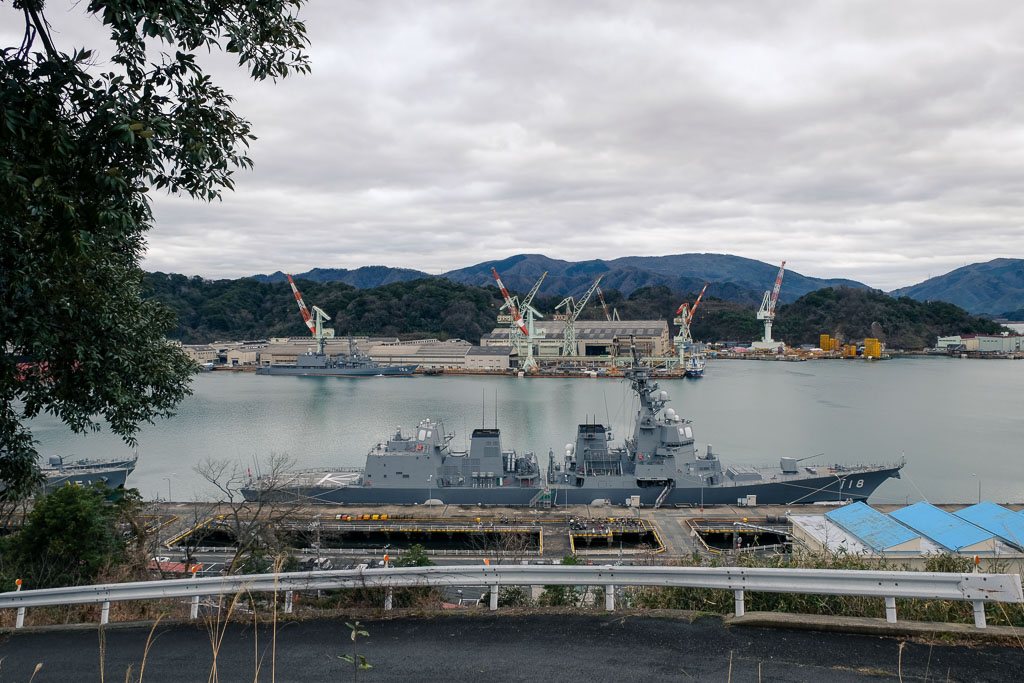 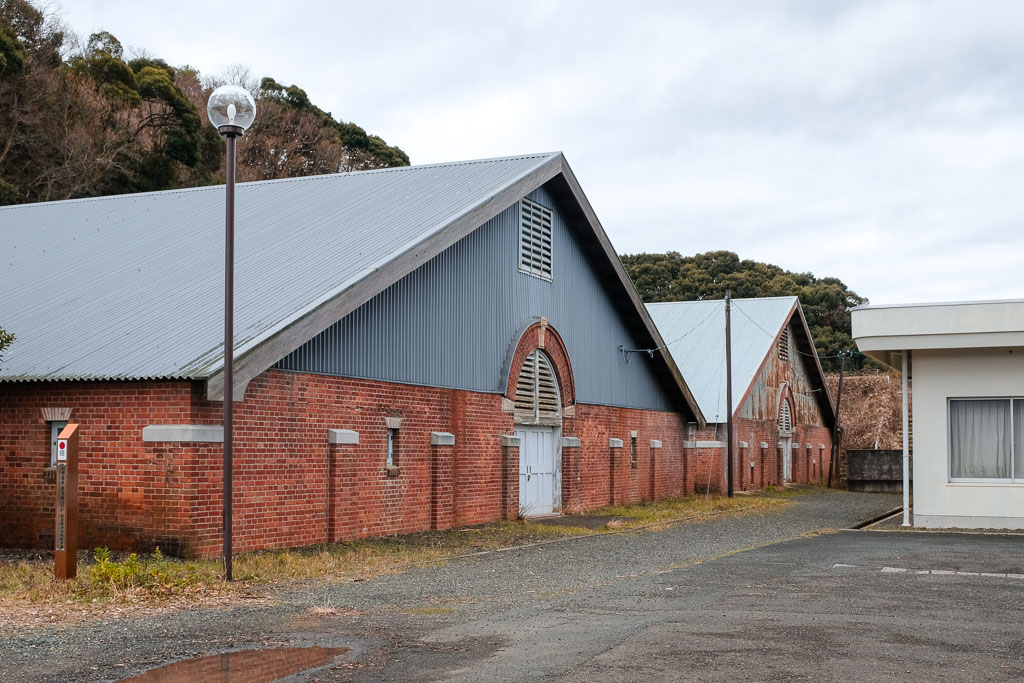 Former Kitasui Water Purification Plant buildings the top of the hill provides a fantastic view of the city and the various ships docked in the bay. With two low-rising buildings behind us, I honestly thought that this was the end of our tour. Little did I know that I was in for the highlight of my trip… 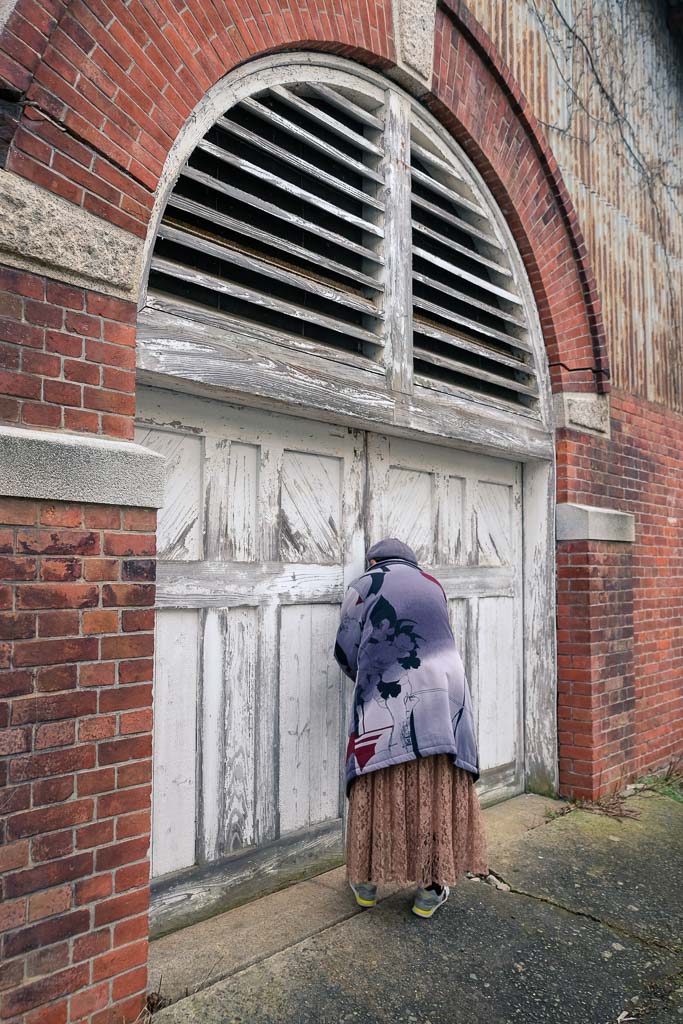 Our tour guide opens the door to the water purification plant 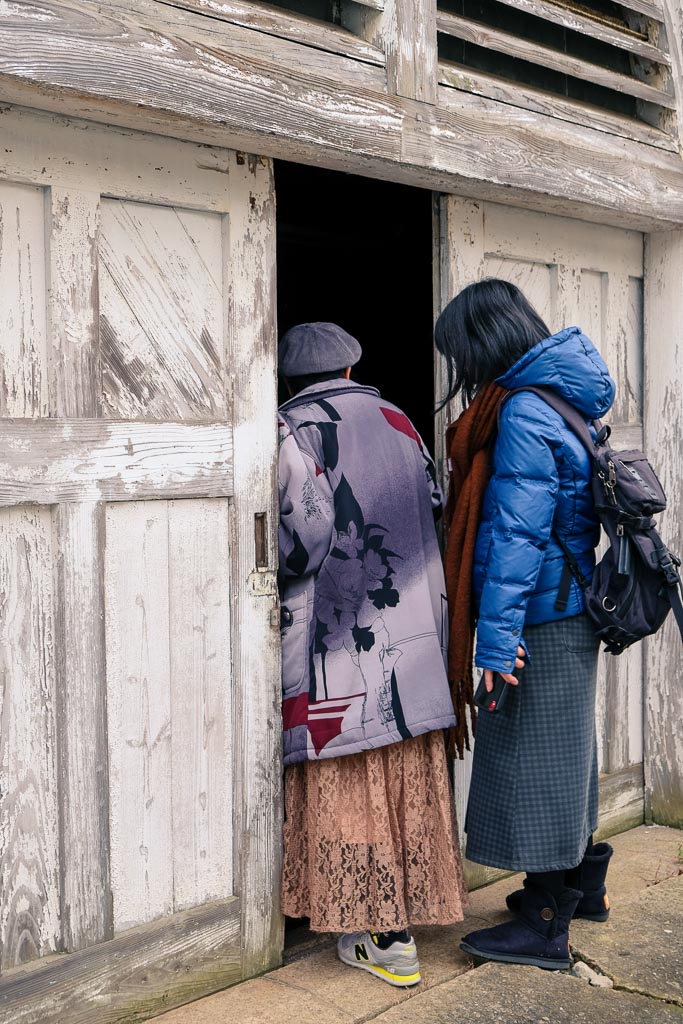 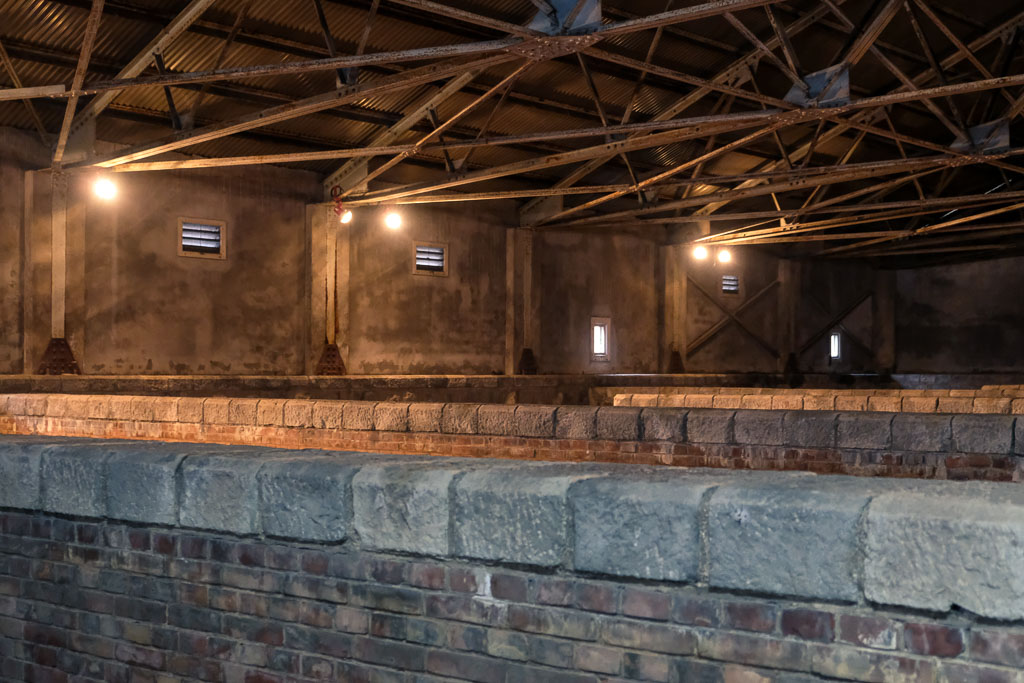 What I saw before me literally left me breathless. With an unassuming building exterior, I was amazed to find the cavernous space of the water purification plant before me. Construction of the plant started in 1901 and continued into the 1920s, and had supplied fresh water to the battleships and naval base of Maizuru during its activity. With walls that soared 6 meters high, I suddenly felt like a hobbit stepping into some grand hall from out of a fairytale. This site is also only accessible by guided tour, so I’d highly recommend anyone to make a reservation, if only to see this spectacle for yourself. 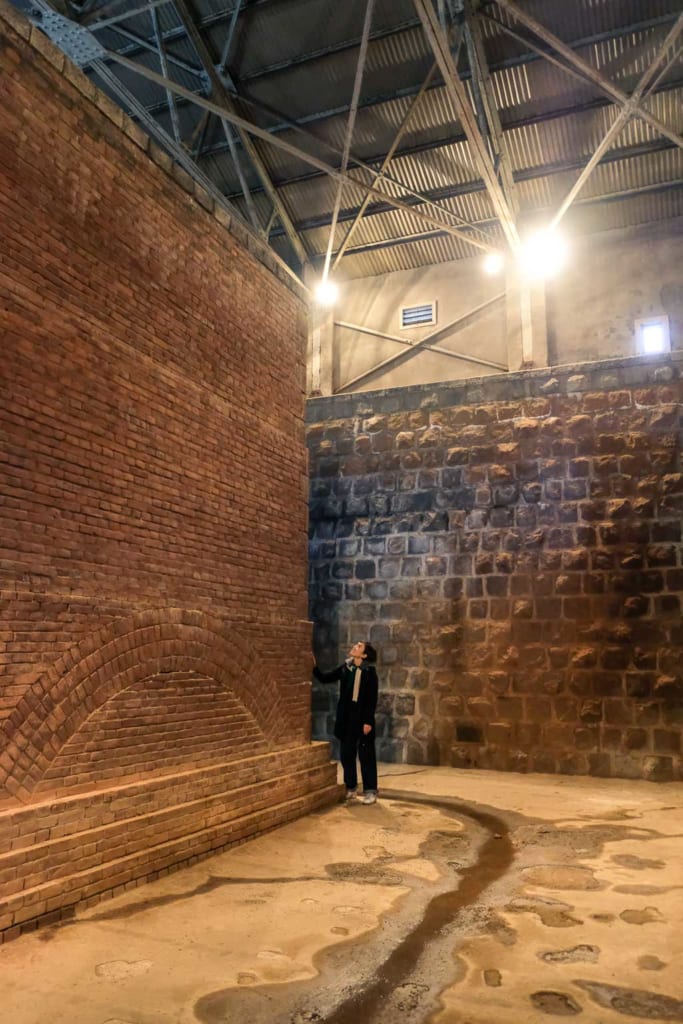 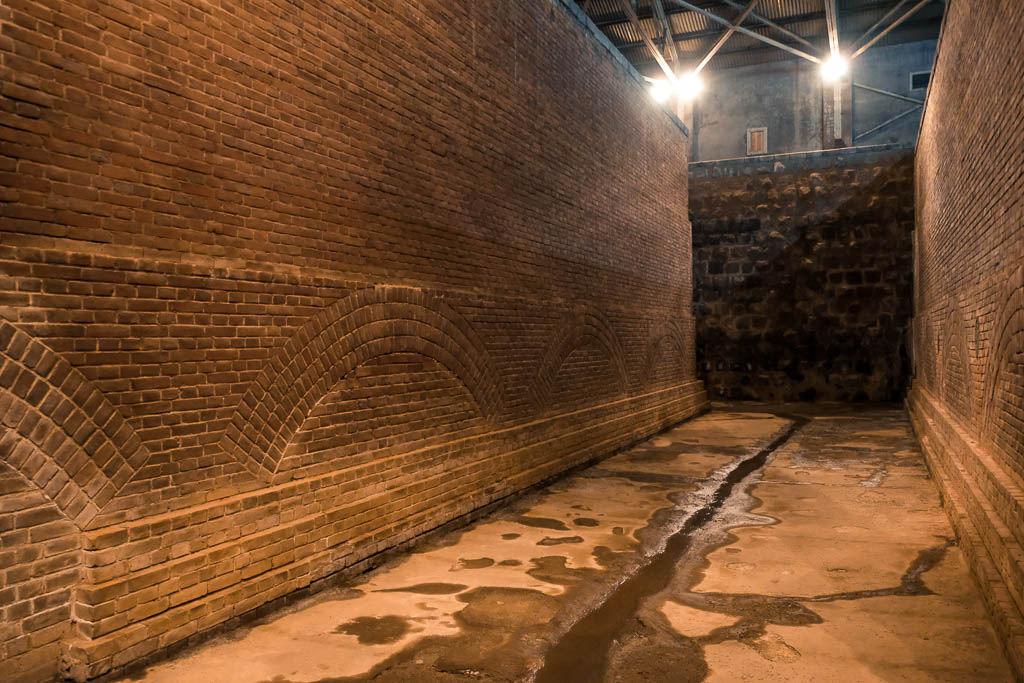 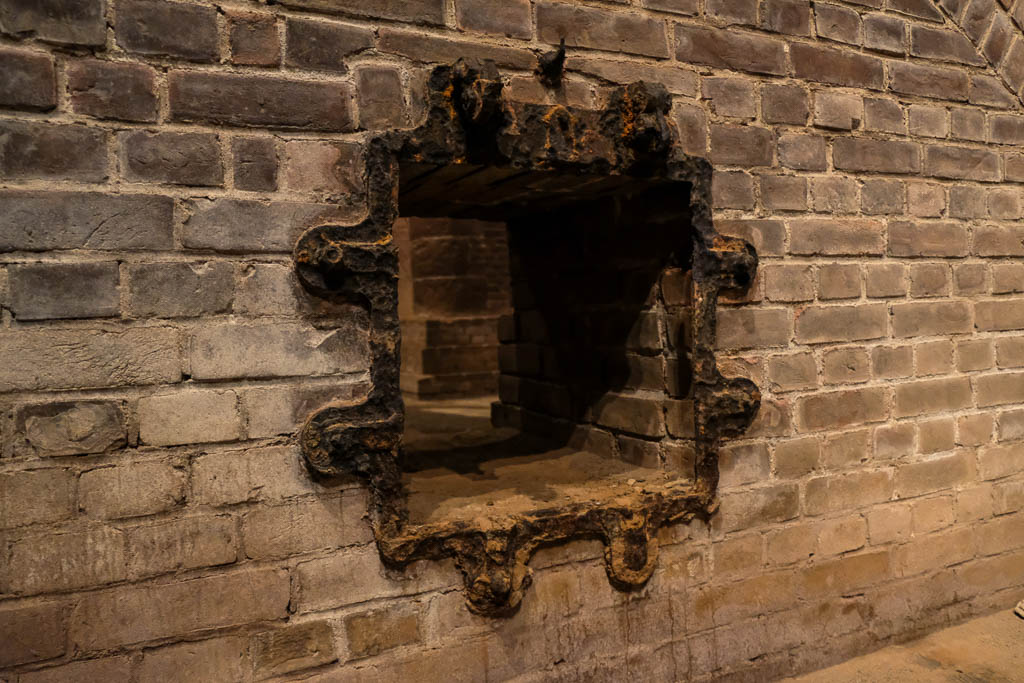 Several smaller watergates helped with the flow of water 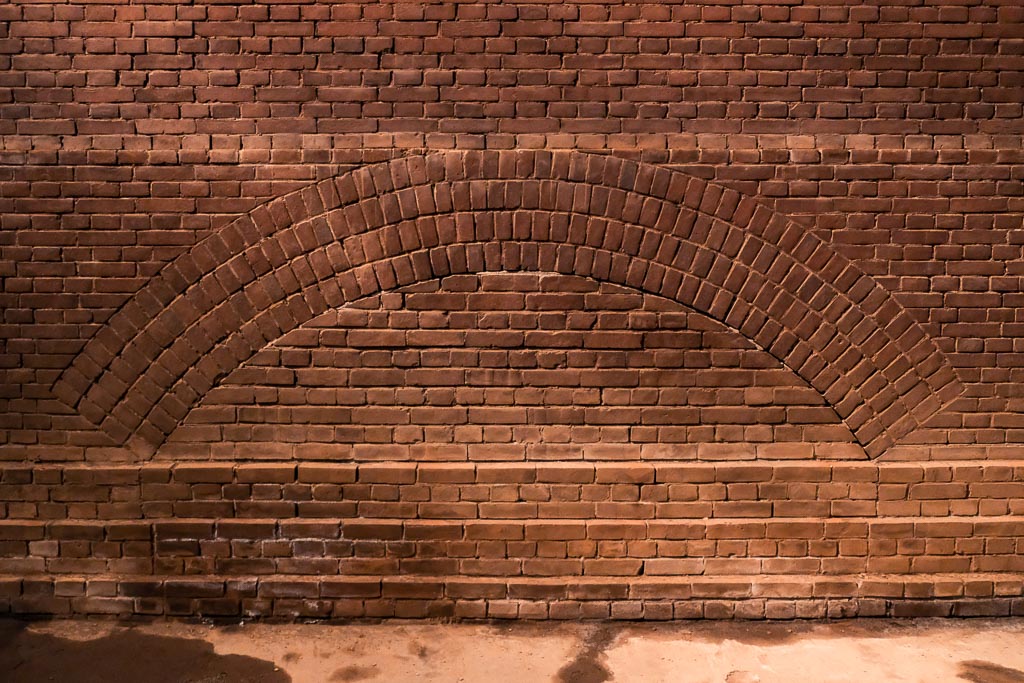 Even when hidden under water, the builders considered the aesthetics of design in the plant

And with that, my tour of Maizuru Brick Park is finished. Before I leave, I have lunch at Café Jazz in Brick Park Building No. 2 where I have one of the Japanese navy’s favourite dish: curry rice. To help with the lost sense of time associated with long ship travel, curry rice was served every Friday to help its crew get a sense of what day it was in the week. Today, the tradition is carried on by the Japan Maritime Self-Defence Force, with curry served every Friday. I order the hiyashi hashed beef curry based on the recommendation of my lunch companions. Considering the navy’s history of curry in Japan, it felt like an appropriate end to my visit. 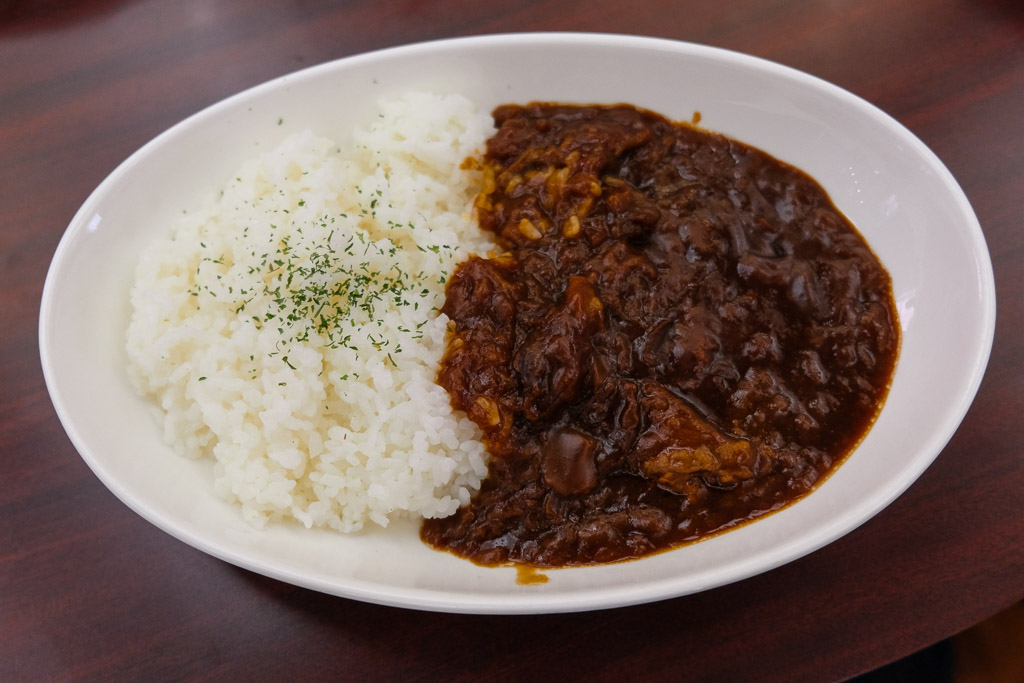 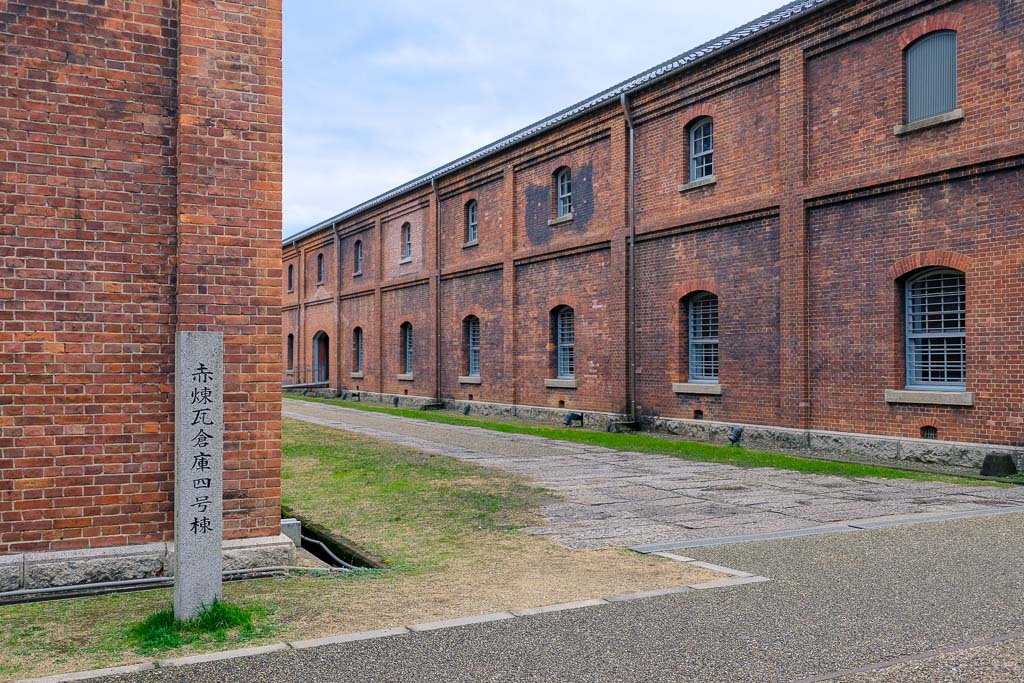 Pick up a map at the main office for a suggested route of the Maizuru Brick Park if you want to explore on your own. However, I’d highly recommend the guided tour to gain access to some of the buildings normally closed to regular visitors. To make a reservation, go to the Maizuru Kanko website and use their reservation form to book your tour.

Getting to Maizuru Brick Park

From JR Osaka Station, head to Kyoto Station for the direct express, the Fukuchiyama Line (Limited Express), the Sanin Line (normal) or the Maizuru Line (normal) in about 2 hours and 40 minutes.

If you’re in the area, one of the Three Views of Japan of Amanohashidate is an hour drive away. Walk along the narrow, pine-covered sandbar, or view it from an observatory to understand why it’s called the “Bridge to Heaven”.